Future Trends: Advancements of Blockchain in 2020

The concept of a blockchain has been around for quite a few years now, but the only large-scale application of it to date has been to support cryptocurrencies. There is a very good reason for this - and it is all about the money, as it so often is. An entire industry has developed to allow for holding, trading, settling, clearing and discovering the price of 1000s of different cryptocurrencies.

The whole premise is based upon complex cryptographic algorithms that validation agents (called miners) use to determine and announce that the transaction is good. The miners do this as they get paid by those making the transaction, so everybody wins.

What I have described above is what has been termed Blockchain 1.0 and was the first iteration of blockchain. It is what the Bitcoin blockchain uses today.

Some clever bods realised that there is so much more that can be done with this technology than just sending money or value around. When you buy something, you pay money or tokens and get something in return. Blockchain 1.0 takes care of the money side of the transaction very nicely but does not go near the delivery of the actual goods or services you have bought.

What if you paid for them and then the seller runs away before signing the goods over to you?

Or what if you take ownership of the goods and never pay?

The solution used today relies on an implicitly trusted central entity to act as an escrow agent to make sure both parties play nicely.

How do know you can trust the escrow agent?

Well, the short answer is you don’t! The solution to this has come in the form of Smart Contracts, which run on Blockchain 2.0.

Smart Contracts are a simple idea, but a very, very powerful one. Imagine you write a contract that says:

‘If you pay me a set amount of money, I agree that you own my house.’

What needs to happen is called an “atomic” transaction. Either both the house and the money change hands or neither. A Smart Contract is a digital way of representing these two parts of the contract and Blockchain 2.0 ensures the atomic nature of the transaction is observed.

The first blockchains that were released to support Bitcoin, for example, do not natively support Smart Contracts, and so newer blockchains, such as Ethereum, are used instead. Many transactions are, however, much more complicated with not two components, but many. These multiple components involved in the complete transaction could also be located in different places in the world, just to complicate matters. What was needed was a system to create an atomic transaction with more than 2 components that could be located anywhere, and hence the birth of Blockchain 3.0.

If you thought that Smart Contracts were clever, then distributed applications (known as DApss) will knock your socks off!

The main blockchain technologies powering DApss today use Ethereum, EOS and Tron, but the number of production applications and the number of actual end-users are still very small. The scope for DAapps is enormous, as it encompasses not just the financial industry, but every industry. 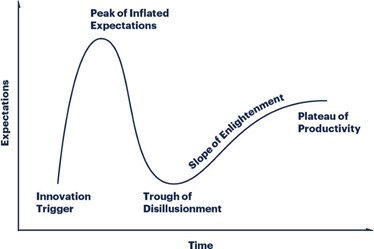 Garner’s Hype Curve above applies very nicely here, and I believe we are just starting on the upward “Slope of Enlightenment” curve and will see real-world uses in the next 2-3 years. Blockchain 1.0 did not fundamentally change the world, but DApps like DeFi (Decentralised Finance) on Blockchain 3.0 may well just.

If you are a Crypto Exchange, Investment / Asset Firm or manager, optimise your liquidity opportunities, or distribute your own with Gold-i Crypto Switch™.

Tom Higgins is the Founder and CEO of Gold-i with experience in financial technology spanning over 25 years. With an in-depth knowledge of the trading technology industry, Tom set up Gold-i in 2008 after spotting a gap in the market to enhance the FX trading process for retail brokers. As the inspiration and driving force behind Gold-i, Tom has played a major role in disrupting the retail FX and Crypto market, giving opportunities to brokers/exchanges across the globe. Now extending the firm’s focus to the institutional market, he uses his market insight to continue to drive innovation.